Bargaining codes under legislation will help in nudging Big Tech to deal fairly with news publishers: Speakers at DNPA Dialogue 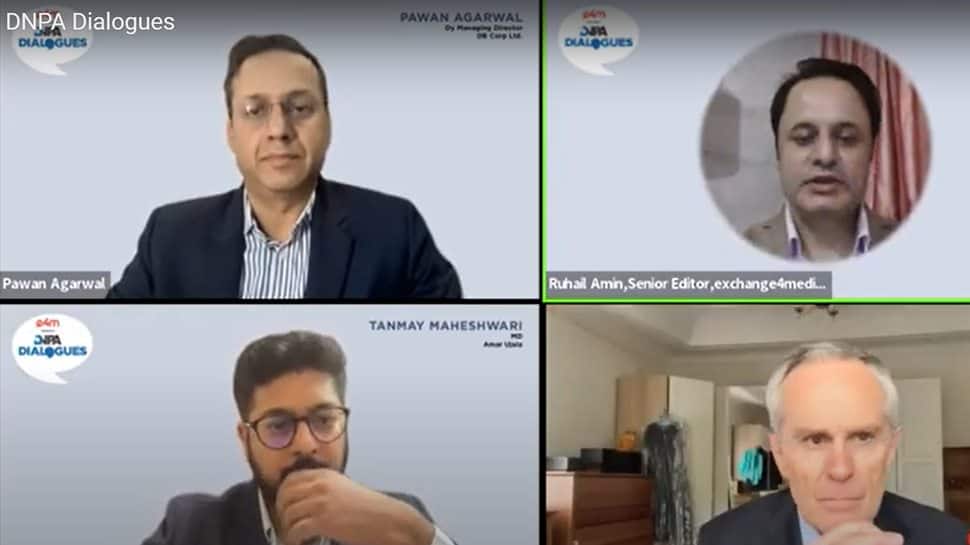 November 25, 2022: Rod Sims, a former Australian regulatory stalwart, and leading experts from think tanks and media circles called upon India’s digital news publishers to take a leaf out of Australia and Canada’s news media bargaining codes as they seek fairness in how Big Tech platforms collaborate with them, at the 1st DNPA Dialogue held on Friday. Crucially, they underlined the role of competition regulators in ironing out differences between tech companies and news publishers on matters of revenue-sharing and transparency.

The eminent speakers at India’s first cross-continent conference on reforming the publisher-platform relationship, held as a webinar, agreed that bargaining codes formed under legislation – as Australia already rolled out in 2021 – will help in nudging Big Tech to deal fairly with news publishers.

The speaker concluded that concrete mechanisms such as legislations should be put in place to push technology platforms to come to the negotiating table with news publishers and pay them equitably for displaying the content they publish.

“In Australia, the News Media Bargaining Code is law, it sits there. So now, Facebook and Google don’t want to be designated under the Code. To avoid designations, they started going out and doing a lot of deals with news publishers. So, the objective of the Code was not to ensure legislation takes effect, to get deals done,” said Sims, who headed the Australian Competition and Consumer Commission (ACCC) from 2011-2022, at the timely event hosted by the Digital News Publishers Association (DNPA).

Sims was instrumental in helping the Code come into effect in 2021, making it easier for Australian news organisations to sign deals with tech platforms. “An important point is, there was scope for arbitration in the legislation if negotiations didn’t work. Arbitration was absolutely essential. Its purpose was to bring the parties together,” said Sims, who is a professor at Australian National University and heads a panel at the Centre for Economic Policy Research in London.

Emma McDonald, a Senior Policy Adviser at Australia’s communications ministry from 2019-2021, said it’s challenging but never impossible to persuade tech platforms to agree to equitable content-sharing terms with media outlets. “Dealing with Google and Facebook was stressful at times, and combative at times, as they didn’t want to come to the table. But when the media companies came together to demand legislation, the government held its nerve and proceeded with it. So, it’s important for governments to hold their nerve.”

“It’s the start of the conversation to protect journalism, not the end,” said McDonald, who as a Senior Policy Adviser at Minderoo Foundation, successfully negotiated deals with Google on behalf of 24 Australian news outlets.

Peter Lewis, a prominent public policy campaigner and Director at The Australia Institute, pointed out that the News Media Bargaining Code made a world of difference to journalism in the country. “What the Code has done is that it changed the way news is now being covered. We no longer see just two or three staff filling up the pages and relying on media releases. We now have more journalists at work. There’s been a change in the mood in terms of journalism. Guardian Australia, for example, is rolling out state-wide local reporting not seen before,” he said.

James Meese, Senior Lecturer at Melbourne’s RMIT University, highlighted that Canada is now working on similar legislation that promises to be an improved version of the Australian Code. “Canada is providing the policy language needed, especially in terms of transparency of the deals that should be struck between the platforms and publishers.”

On this same point, Rod Sims spoke about the takeaway for India. “In Canada, one large improvement is that they would possibly publish the information about the deals in aggregate for the public to see. That apart, legislation is lined up for the Congress in the US. And in the UK, they’re working on general legislation. So, my advice to India is, copy the Australian Code, and see the variation in Canada. You’ve got models that could be adopted.”

Paul Thomas, Managing Director of Star News Group, said collaboration between media companies is the best road ahead in improving the platform-publisher relationship. “Collaboration between them is vitally important. You have to hold your nerve, stick together, and have a stronger voice. All over the world, publishers should learn from our experiences.”

Tanmay Maheshwari, Managing Director of Amar Ujala and Chairman of the DNPA, underlined the timeliness of the Dialogues. “We know that we have to coexist with Big Tech, but at the same time, we can’t ignore some of the limitations in the digital news ecosystem. Hence, the DNPA Dialogues. The intent and purpose is to create awareness of what’s right and how things can be made better,” he said.

Others who spoke at the groundbreaking event are Pawan Agarwal, Deputy Managing Director, DB Corp; and Annurag Batra, Chairman and Managing Editor, Business World and e4m.

The Dialogues are a brainchild of the DNPA, an advocacy body and umbrella organisation for the digital arms of India’s 17 top news outlets, seeking to protect the interests of digital news publishers.

The next edition of the Dialogues will be hosted on December 9.