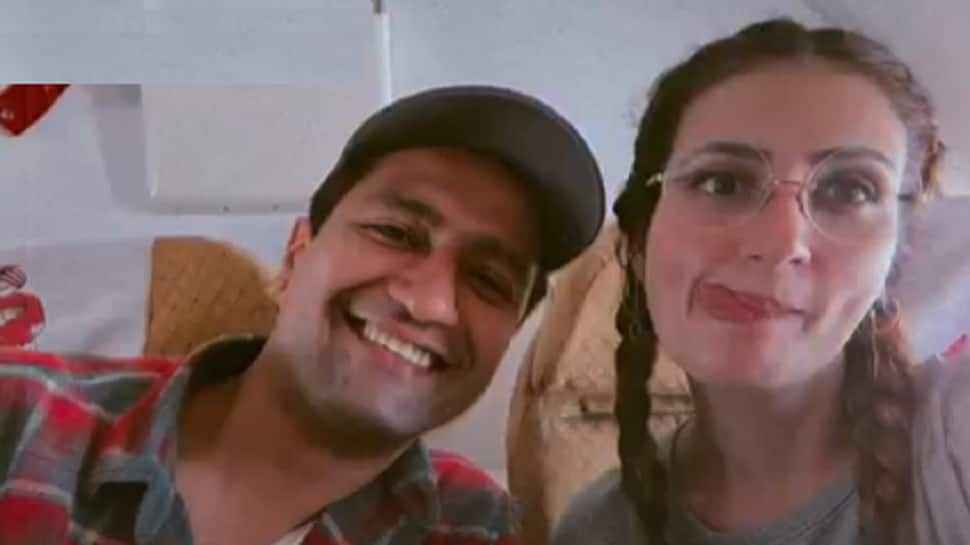 New Delhi: Fatima Sana Shaikh who is gearing up for her upcoming film `Sam Bahadur`, on Sunday shared a cute yet hilarious picture featuring her co-star Vicky Kaushal on social media.

Taking to her Instagram stories, the `Dangal` actor posted a picture with Vicky from a flight. Sharing the picture, she wrote, “Thodi pagalpanti zaroori hai.”

In the picture, Fatima and Vicky were seen with funny expressions as they were sitting on the plane. The `Ludo` actor dressed in a grey pullover top with two braided ponytails.

On the other, the `Uri: The Surgical Strike` actor was seen wearing a checked shirt that he paired with a white tee and a cap. Recently, she also shared a glimpse of how she is preparing for the role of Indira Gandhi, whom she will be playing in the movie.

She dropped a picture of a book titled `Indira -The Life Of Indira Nehru Gandhi` with the caption “Such an interesting book on her life. Half way through.. would highly recommend it”. She also posted a BTS picture of herself sitting in front of the mirror on the sets of the highly anticipated film `Sam Bahadur`.

Sharing the picture, she wrote, “And here we go #SamBahadur”. `Sam Bahadur` is based on the life of the legendary Chief of the Army Staff and Field Marshal Sam Manekshaw. The film is directed by `Chhapaak` filmmaker Meghna Gulzar and also casts Sanya Malhotra as Sam Manekshaw`s wife Siloo Manekshaw. It is produced by Ronnie Screwvala.

Sam Manekshaw`s army career spanned four decades and five wars. He was the first Indian Army officer to be promoted to the rank of Field Marshal and his military victory in the 1971 Indo-Pak war led to the creation of Bangladesh.

This marks the second collaboration of the `Sanju` actor with Meghna after their hit `Raazi` in 2018.

On the work front, Fatima will also be seen in `Dhak Dhak` alongside Taapsee Pannu, Dia Mirza, Ratna Pathak Shah, and Sanjana Sanghi in pivotal roles. Directed by Tarun Dudeja, the movie is based on a female road trip and will see the four ladies as protagonists, gearing up for the ride of their lifetime.

Vicky, on the other hand, will also be seen sharing screen space with Sara Ali Khan in Laxman Utekar`s yet-to-be-tiled film. In his kitty, he also has `Govinda Naam Mera` with Bhumi Pednekar.